The fortunate people of Mannheim have arguably two giants within their community.  Both can boast of staunch support, both are woven into the fabric of the cities diverse society, both have annually subscribed followers and both evoke a passionate sense of allegiance within these followers.  I speak of Mannheim’s renowned opera company based at the Nationaltheater and the cities ice hockey franchise, die Adler Mannheim (The Eagles), that nest some 5km away from the theatre at the SAP Arena.  As one who has experienced both; I was left questioning whether one could bring together these two seemingly contracting communities and entice their respective members to explore the others.

Do not think me mad. I am very aware that there are fundamental differences between opera and hockey.  One glorifies music, literature and the arts; the other: sport.  But I believe there is one major similarity; drama.  One has to look beyond the modern concept that audiences for sports, such as ice hockey, and those for opera are different.  Far from it, they historically were held in the same venues and for the same people.  Verona’s amphitheater, Arena di Verona, was built in AD30 by the Romans for the explicit purpose of housing spectacles of music, drama and sport.  And this was not unique in history.  As for me, I have always thought of stadiums as a place full of drama.  I originate from Manchester, Northern England, the home of the most valuable football brand in the world, Manchester United F.C..  Their stadium, Old Trafford, built in 1910, harks back to these historic ideals.  It is fittingly nicknamed “The Theatre of Dreams”.

In the second instalment of this blog, I plan to uncover and explore the similarities between these events.  Until then, with both the opera and hockey seasons now in full swing, I heartily recommend you uncover them for yourself.

Clasped shut, and here to stay.

Mannheim is undeniably diverse.  Its cultural traditions and customs are rooted in a plethora of countries and various religions.  If this was an opera; the stage and setting would undoubtably be German, but the origins of the drama that unfolds here is a little more difficult to pin down. As such, nothing really surprises me here.  I have grown to expect to be surprised and I relish it. For me, this is where the beauty of this city lies. I may no longer be surprised by Mannheim’s constant revelations but their occurrence remains relentless.

That said, I did not expect to see the small and yet significant beginnings of a „Love Padlock“ bridge in Mannheim.  While walking over the Kurpfalzbrücke I saw a small cluster of colour on the handrail. On closer inspection I discovered half a dozen padlocks of various shapes and sizes clasped together as though huddling for warmth.  The padlocks serve as a symbol of a couples love.  It is a tradition that dates back 100 years to Serbia during World War I but it has subsequently swept across the western world since 2000.  Couples bring an open padlock to a bridge, mark it with their names and clasp it permanently to the bridge.  Their symbolic bond is made everlasting by dropping the padlocks key over the edge into the running waters below. 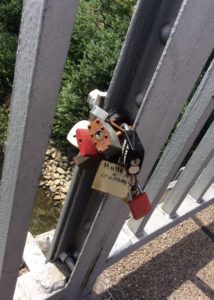 This outward depiction of love leaves councils debating whether the aesthetic and structural concerns that the paddocks cause can be tolerated because of their symbolic nature and the resulting tourist attraction they create. It is unknown how Mannheim’s authorities will respond.  Perhaps like Cologne’s. Admittedly Deutsche Bahn was not too keen on finding tens of thousands of padlocks lining the Hohenzollernbrücke bridge in Cologne, but after much debate, they stayed. Perhaps it is not a trend that will catch on here in Mannheim, but I for one was pleasantly surprised by this outward show of love, affection and romance. 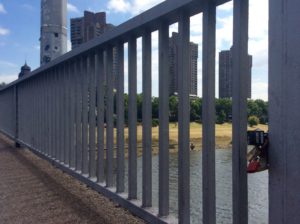 An English Woman in Mannheim 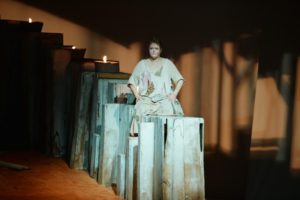 When I was approached by the theatre to write for them, their premise was for me to create material from the viewpoint of “An Englishman in Mannheim”.  I had wondered at the time whether the artistic mentality or cultural outlook of an Englishman is that different to a German.  Whether it is or not, Sunday’s performance of Elektra at Nationaltheater Mannheim led me to conclude: there is a new “English woman in Mannheim”.  And by God, she’s made an impression.

The return of Strauss’ Elektra to the Nationaltheater stage has meant the return of soprano Catherine Foster.  Elektra is an opera that I would happily, without regret, state as my favourite. It balances perfectly the primal themes of hatred, betrayal and the lust for revenge with great psychological depth. Catherine is sublime in the title role.  I am not here to write a review for the theatre, I am sure a quick Google search would produce numerous wonderful reviews of her and the production.  However, I wish to tell of the sense of pride I felt when watching someone from my country perform with such musicianship, mastery, intelligence and artistry.  I left the theatre feeling glad that someone of such high calibre represents my countries modern artistic contribution to the operatic world.

Today, art is recorded for posterity and accessed  by the click of a button.  However, true artistic experiences are often transient.  The experience of listening to Catherine supported by the magnificent swelling of a Straussian orchestra is something that has to be experienced in person.  The physicality of the sound is overwhelming.  I hope at the next performance I see a queue of people waiting for tickets stretching to the Wasserturm and back.  For me, any empty seat in any performance of Elektra is like an unchecked lottery ticket.  People in Mannheim must make the effort to go, the experience might just change their life.

I was first introduced to the complexities of answering the question “What is Art?” while studying Philosophy of Art and Literature at University.  Since then, I have been fascinated by the question and even the concept of why we try to answer such a question.  I concluded that I take great pleasure from the fact it is impossible to create a definitive answer that we can all agree upon.  It seems that everyones individual perception of what constitutes as art is hugely introspective.  I for one think this is wonderful.  It has led to a boundless scope for human creativity and equally limitless interpretation.  Duchamp’s controversial and revolutionary Fountain (1917), Tracey Emin’s My Bed (1998) and the ‘plastic bag scene’ from Sam Mendes‘ film American Beauty (1999) come to mind as fine examples of this point. 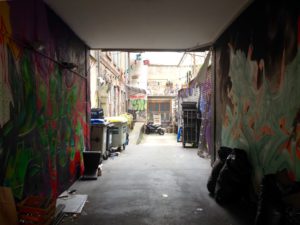 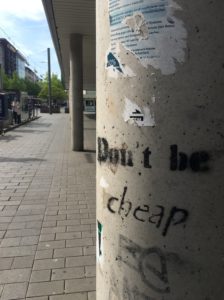 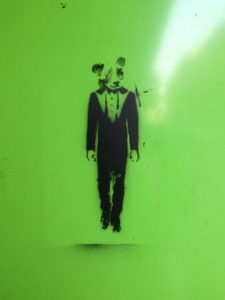 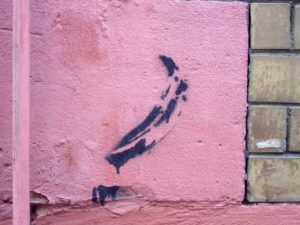 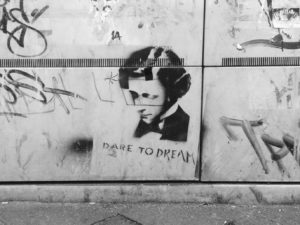 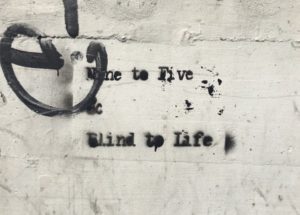 „What if your bag will carry you?“ Tomás Saraceno 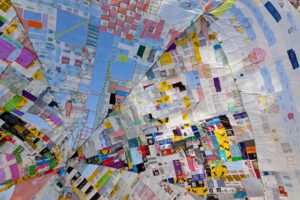 There is a small but perfectly formed treasure in Mannheim and if you have not already experienced it, you are in for a treat.   The Wilhelm Hack Museum, hidden away in Ludwigshafen, is a beautiful contemporary art gallery.  It was the Tomás Saraceno exhibition that drew me there. I have appreciated his work for years and this is the first time I have been able to get up close to it.  I was not disappointed.  In the flesh, his work is intriguing, provocative and majestic.

‚Museo Aero Solar‘, the largest feature of this exhibition of his work, is an aerial sculpture that is completely made from reused plastic bags. It floats around the globe and wherever it lands new sections are added.  When it is released on its next voyage across our skies it has grown in size, changed shape, and leaves in its wake a wonderfully profound social lesson. The concept of the art is twofold: a functional sculpture that is not defined by aesthetics but by its collective creation and its simple social message; „resources are not endless, let’s use them smarter”.  Mannheim is not the cleanest city I’ve lived in and the artists work is rather poignant in its present location.  However, moving away from his message, one can appreciate the sheer beauty of its simple concept and its even simpler creation.

Opera is often littered with social commentaries, moralistic subtexts and provocative (and often revolutionary) themes.  Skilful directors make these references relevant for todays audiences but it is refreshingly novel to be influenced by an art work which is originally directed at here and now.  Whether or not we see sense and rid our shops of plastic bags or at least find a biodegradable alternative, I think Saraceno’s message will sadly always remain relevant.

I recently watched NTM’s charming, skilful and thoroughly entertaining revival of Jens-Daniel Herzog’sCosì Fan Tutte. Herzog’s decision to set the opera in the 1950’s is perhaps not a unique one, however his adaptation creates a uniquely all-encompassing experience for the audience here in Mannheim.

I appreciate when theatre resonates with the people & the area it is performed for and this cities modern heart was forged in the 50’s.  I could not help but realise I have been bathing in the glorious 50’s here in Mannheim for some time. Bombing destroyed much of the city during World War II and it was extensively rebuild in the 50’s and 60’s.  The Nationaltheater in 1957.  What was the city like back then?  How would the two main female protagonists of the opera be and how would their story have played out in these very streets?

Although prior to the extensive movement of workers that led to the city having an influx of Greek, Italian, Turkish and Yugoslavian culture in the early 60’s, these two young Mannheim women would have been heavily influenced by American culture.  U.S. Infantry entered the city unopposed in March 1945, subsequently settling in the area.  The city would have been awash with American fashions, etiquettes and traditions.

These American educational videos are wonderful insights into the possible social demands on women in 1950’s Mannheim.

The architecture that lines the streets of Mannheim tells a story of rebirth, rebuilding and reinvention.  Mannheim epitomises the notion that not everything has to be old to have history.  Culture does not have to be defined or placed in a box.  The streets of Mannheim are not paved with gold, but signs of forgotten stories.

If only these walls could speak, what stories they could tell.

“Do not fear mistakes. There are none.” Miles Davis

As I begin my first article, I must say, my overall feeling is trepidation.  I calmly remind myself of Davis’s poignant remark; “Do not fear mistakes. There are none”.  I do hope he was right.

Since I shall be sharing my thoughts with you for the foreseeable future I thought it only right and proper you have an idea of who I am.  I was brought up with music and drama as the cornerstone of my education.  My parents saw this as a good way to keep their sons busy and out of trouble.  It did.  My brothers and I have had our adventures, but we each have ended up in the arts in one way or another.  That said, the sound of opera was never heard reverberating around the family home.  Instead, it was more the likes of Paul Simon, The Dubliners and John Rutter that were the soundtrack to most of my childhood memories.

From my early 20’s I knew I wanted to direct opera.  I see every aspect of opera as colours with which I can paint with.  In opera, above all, I see an endless array of vivid colours and thus endless possibilities.   I have designed, played instruments, conducted and sang: all so I could understand each colours nuance.

My partner and I moved to Mannheim last year when she joined the ensemble at the opera house.  I have little German language to call upon and yet strangely I feel at home. I love Mannheim’s diversity, it reminds me of northern England, and it shines through in the culture on offer here.  One just has to find it.

Enjoy the glimpses of spring sun, and Miles at his best in 1957…