Lighting the First Candle in our Advent Wreath

I have just returned to Mannheim from a whirlwind tour of my childhood.  I had the luxury of spending a week at my family home in the outskirts of Manchester during which I reconnected with all that is English.  My accent was commented upon several times.  Most Mancunians I meet now think that I am German.  Apparently my English is amazing: though worryingly for me, not native.  My brother was eager to re-introduce me to English culture.  First on the list was food.  Within a few hours of touching down I was sat with an English Ale, a packet of Smiths crisps, a pork pie, and a hearty slice of Shropshire Blue. I was not complaining.  I tell you all this as what followed stuck with me.  My brother, his adorable 18 month year old  son and I journeyed into Manchester town centre, our plan was to see the sights.  I left the plans for the days adventure to my brother.  His first choice of destination, and now the first choice for many Mancunians this time of year, was the huge German Christmas market located in Albert Square, in front of Manchester Town Hall.  He was not taking this quasi German-Mancunian there to make me feel more at home, he was taking me there to experience the authentic festive period in Manchester.  I was 14 when the first German markets arrived in Manchester and since then they have become simply know as the Manchester Christmas Markets.  There are hundreds of vendors, selling items ranging from Glühwein and Apfelstrudel to Pie & Mash and hot Vimto. 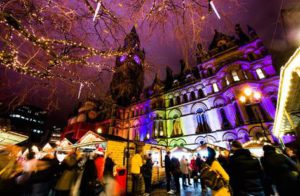 What this experience reaffirmed for me was that modern culture is not defined by or an illustration of geographical boundaries.  The residents of Manchester are proud to have such markets in their city.  The markets draw huge numbers of visitors each year from across the region.  They have taken ownership of this culture and made it theirs for nearly 20 years now.  So is it still German culture?  I would now argue it is not.  It is Mancunian.  When people across the northwest of the England think of German Christmas, they think of Manchester.  Of course, the constant incorporation of other cultural ideas is a very English thing.  A case in point; our national dish is now reputedly Tikka Masala.  Since moving to Mannheim, I have engaged with as much culture as I can, but never once thought of it as my culture.  No matter how long you are staying in Mannheim, whether for a weekend or a year, I believe we could all learn a little from the Mancunian Christmas spirit.  One should regard the culture that surrounds us as our culture.  Since doing so, I have found my interaction with it so much more rewarding.

During this coming festive period, Mannheim offers such wonderful culture, try and take ownership of it.